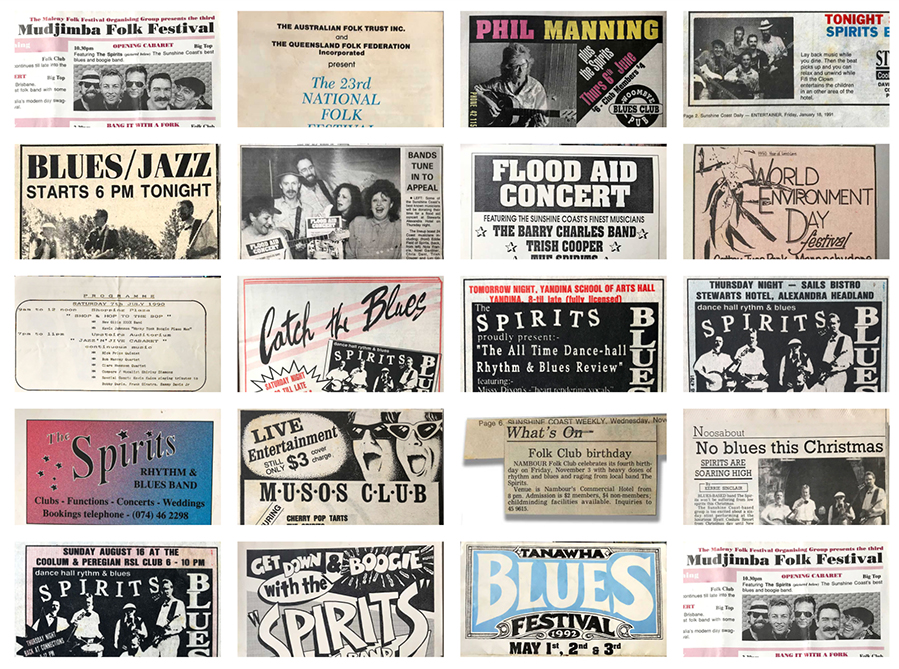 The Spirits Blues Band began playing music back in 1998 with a lineup that included Greg "The Mean Miss-treater" Lindner on drums; Lewis "Lazy Boy" O'Neill on rhythm guitar; Johnny Anderson on dobro; Chris "The Master Blaster on the Telecaster" Dent on lead guitar & Eddy Field on hard core bass guitar, with Ian Wilks on tenor banjo & harp. All band members sang - which is unusual in a 5 piece band!

As a band The Spirits did 22 weeks straight in the at Stewarts "Connection" bar playing every Thursday to two distinct audiences. The early set arrived for dinner & took to the dance floor in absolute style; many were members of the local Jazz Action Society. The second crowd were the "clubbers" who would hit around 9:00pm looking for pumping blues with more of a hard edge.

The relationship between these two distinct groups gave the Spirits a great repertoire of early jazz & blues standards, followed up with a more electric Chicago styled set.

Versatility was the call of the day & it worked for many months. The boys started to write and perform their own material which found favour very early in their development as a commercial success.

The Spirits Blues Band went on to establish The Woombye Pub Blues Club, The Tanawha Blues Festival and set up and ran the Maleny Blues & Roots Stage that later moved to Woodford.

The Spirits Blues band also had many great gigs, they were the local support band for The Fabulous Thunderbirds tour at the Galaxy at Stewart's Alexander Headland Hotel. They also did many fund raisers for the Folk movement & often took the role of backing band for great Australian legends like Phil Manning.

While The Spirits Blues Band spanned from 1988 until 1993, the lineup stayed very consistent, Johnny Anderson left at the end of 1989, Eddy Field was replaced by several bass players when he left in 1991 & Ian Wilks left the band towards the end of 1992.

Over this period the Maleny Blues & Roots stage was developed - later moving to Woodford; The Tanawha Blues Festival ran for three festivals until the venue was sold.

Below is a "pop-out" gallery - click any image to open. Here are some of the memorabilia from the various festivals, gigs, fund raisers & Woombye Pub Blues Club nights that the The Spirits attended.