After some time the Spirits Blues Band decided to move from Stewarts Alexander Headland Hotel & looked for a venue where they could share the blues with fellow Sunshine Coast Blues musicians.

Once the boys found Phil & Morris - the Woombye Pub hoteliers of the day; the venue was established for the commencement of The Woombye Pub Blues Club, which came into existence late in 1988.

The venue was so popular every Thursday evening, that when some touring acts arrived the crowd was unable to fit within the confines of the venue.

The Woombye Pub Blues Club ran with the assistance of the Spirits' band members for over 5 years every Thursday night! 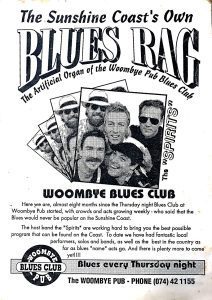